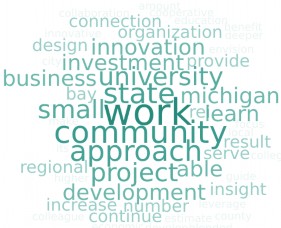 The Impact Survey was conducted in the first quarter of 2017 to record and report the impact of MSU EDA University Center for Regional Economic Innovation (REI). The survey was sent to a total of 640 REI partners who previously engaged in REI projects and/or events including, but not limited to, writing a colearning plan, attending the Innovate Michigan! Summit, being a part of the REI Consultative Panel or attending an REI webinar. The survey asked them to report the nature of their involvement and the impact generated due to their participation in REI projects and/or events. As of April 19, 2017, the survey received 41 responses. The respondents were a blend of public and private sector employees, academicians and practitioners, from various places across Michigan. The survey respondents reported an overwhelmingly positive impact of REI.

Key findings of the survey include:

A total of 154 individuals have received 8 or more hours of technical assistance from REI. In addition, REI partners believe the most important impacts of our projects and events are the opportunities to gain knowledge about issues pertinent to their work and to network with people who were resourceful for collaborations. It was reported that the knowledge disseminated from REI helped its partners connect to their communities too. "We learned how to ask better questions and become partners, not an outside organization looking in," said one respondent. In some cases, our partners were also able to secure additional funding through their work at REI. Northern Initiatives reported that they were able to secure over $200,000 from various sources. Northern Initiatives was also "selected as one of three nationwide organizations to participate in the Corporate for Enterprise Development learning cluster, a human-centered design project for the online learning portal," an achievement that, they report, has stemmed from their project with REI. Hailing REI as "a guiding and envisioned model," many REI partners also implemented the knowledge and ideas received from REI events. From expanding their projects' reach into different communities to presenting at conferences and from implementing social innovation projects to continuing research in community development, REI partners have done it all.