CCED-Flint, along with Flint Partners, formed Neighborhoods without Borders (NWB) in 2012. NWB is a community-based network that uses an asset-based approach to work on critical Flint neighborhood issues and their root causes. Our current efforts center on dismantling systemic and institutional racism. We do this by working to understand the effects of white power and privilege and to understand African. 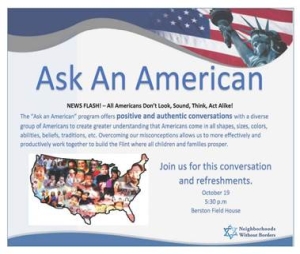 American history in Flint. Often our approaches are quite simple, like our Neighborhood Without Borders signs. We also host our “Ask An American” series involving simple conversations with people sitting in a circle. Another approach are the more in depth conversations of Tendaji Talks.

We even give out “Hugs for Unity.” Here we are at a Flint Firebirds hockey game with the Firebirds mascot.

But we also take a stand when things get rough. One of our African American brothers’ truck was vandalized. In one week we raised the money to repair his truck and stand up to White supremacy terrorism.

Neighborhoods without Borders is working hard to dismantle racism – the number one issue of our times.

To learn more about Neighbors without Borders or other initiatives at CCED Flint contact Robert Brown at brownr23@msu.edu